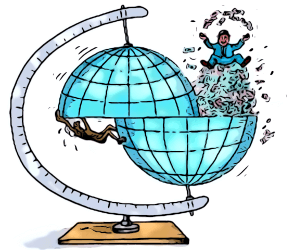 The 'post-democracy', according to Colin Crouch, it is the political phenomenon that is expressed in the following terms, in comparison with constitutional democracies. 'Democracy challenges class privileges in the name of the subordinate classes. Post-democracy denies the existence of both, privilege and subordination'. (1) In the 'liquid society' advocated by Zygmunt Bauman, precariousness and economic uncertainty tend to penalize the weakest sections of the population. Which at the same time suffer the withdrawal of that increasingly narrow blanket once known as the 'welfare state'.

'The globalization of interests economic and the fragmentation of the remaining population produce this phenomenon, shifting the political axis from those who seek to limit inequalities of wealth and power in favor of those who wish to bring them back to pre-democratic levels'. (2) Thus continues the analysis of Colin Crouch, who does not shine for optimism but induces attention in observing the changes in the society in which we live.

The globalization of exploitation it is under our very eyes and there is no concrete sign of interest in the redistribution of resources in today's political debate. The concept of 'equality', which stood out alongside those of freedom and brotherhood in the mottos of the French Revolution, was dispersed precisely in those democracies - now 'post-democracy' - which are its children. And so the fundamental human rights to a dignified life - which cannot ignore access to nutritious food and drinking water, housing, education and work, health and social assistance, according to inclusive and non-discriminatory criteria - have disappeared from the radar.